Turkey Tail mushrooms are known to be a well-researched and the most revered medicinal fungi all over the world, but particularly in Japan and China. It is a herbal mushroom that has an tremendous amount of health benefits that anyone can imagine. Known in a variety of names, like Coriolus versicolor, Trametes versicolor, Polystictus versicolor, Kawaratake and Yun Zhi, they thrive well in the northern parts of Europe, China and Japan. It can also be seen proliferating in the thick forests of many areas in the United States, Canada and Siberia. The plant is highly regarded in Japan and China because of its effectiveness as a herbal medicine.

Turkey Tail Mushrooms, when eaten raw, are leathery and chewy. This is why most users consume them by making tea out of them. One can make a medicinal beverage out of turkey tail mushroom extracts by boiling them for a long period of time. However, a number of long-time users swear to the mushrooms’ optimal effectiveness by chewing them.

Active, medicinal compounds are the reasons why the turkey tail mushroom extract is recognized as one of the leading form of herbal treatment in Japan. In a number of Japanese clinical studies and trials, the mushrooms extended survival rates of people who had breast cancer, lung cancer, cancer of colon-rectum, cancer of the esophagus and prostate cancer. Turkey Tail Mushroom was so successful in exhibiting medicinal properties that it was approved by Japan‘s Ministry of Health and Welfare, to be used as a significant cancer treatment. Turkey Tail Mushroom, or Trametes versicolor, exhibited not only anti-tumor, but also anti-inflammation and antiviral effects, as well. It also fights serious liver problems, like chronic active hepatitis and hepatitis B. 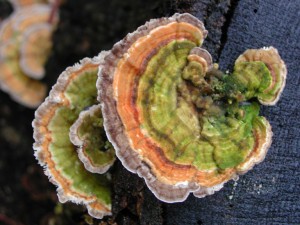 Numerous scientific researches and studies pointed to the fact that Turkey Tail Mushroom extract provides a host of medicinal and health effects on users. These include:

Trametes versicolor, as a number of scientists refer to Turkey Tail mushrooms, is obviously significant for a variety of medical reasons. However, they are well-known for being a natural source of polysaccharide PSK, which is an anti-cancer compound. Extensive research has actually identified two polysaccharide-protein components, known as proteoglycan, of Trametes versicolor responsible for these anticancer effects, PSK and Polysaccharide-protein complex, or PSP. However, PSK is far more abundant than PSP, and so, is more utilized for most clinical studies and treatments.

PSK is a high-concentrated molecular weight carbohydrate that is found to exist in abundance in fruit bodies. Furthermore, it is discovered to be present in much higher concentrations in the mycelium part of Turkey Tail mushrooms. There have been studies on extracts from Coliorus versicolor (Turkey Tail), which proved that they can be used positively as a supplementary treatment for radiation therapy and chemotherapy. Indeed, because of the relative abundance of PSK in these Oriental fungi, more and more cancer specialists and immunologists now consider it as a key cancer treatment.

Maintenance of the immune system and liver function

It has been proven by a number of clinical research and studies in Japan and China that the defenses of the body can be strengthened at its most basic level with the 100 percent immunity-protection properties of Turkey Tail Mushroom. Traditional Japanese and Chinese healers have long revered Turkey Tail Mushroom for its valuable parts and extracts. Such ingredients are used to create natural medicinal tonics meant for strengthening the immune system and maintaining a healthy liver function. At the same time, modern medicine has shown that Turkey Tail Mushroom, because of the PSK compounds that it contains, significantly provided strong support to the cellular defenses of the body. Generally, when one uses Turkey Tail Mushroom extract, he is guaranteed at least 25 percent polysaccharide concentration. This guarantees high potency in the strengthening of Immune system and liver function.

Turkey Tail Mushroom extract has the ability to hinder prostate cancer growth and spread, according to leading trials in Australia. These Australian researches showed that conventional methods of treatments, like radiotherapy and chemotherapy, were able to stop cancerous cells, but not the cancer stem cells. Such cells are that ones that actively initiate the disease and cause it to spread. However, Polysaccharopeptide or PSP, like PSK, effectively targets and destroys prostate cancer stem cells. It also exhibited anti-tumor effects on trials made with mice.

Human clinical trials likewise revealed that PSK reduce the recurrence of cancer when utilized as an adjuvant. Similar scientific research has demonstrated that the mushroom is capable of inhibiting some human cancer cell lines. Further studies have shown that PSK, in combination with other medicinal fungal extracts, inhibit proliferation of certain cancer cells.

It is inevitable that, with the continuous medicinal success of Turkey Tail Mushroom, it is bound to become a vital, significant fixture in the medical field, focusing mainly on the treatment of cancer. A long-time traditional agent in the treatment of cancer cells and boosting of the immune system, it is now being proposed as a possible inhibiting agent of HIV replication. Apart from a being an effective cancer cell killer, Turkey Tail’s PSK is now identified to be an efficient agent capable of regenerating sick bone marrow. This is apart from its long-proven capabilities of increasing one’s level of energy and providing basic pain relief in patients afflicted with cancer and other serious diseases.